Recently I had the chance to spend an entire day sampling a number of cars and trucks along Maryland’s picturesque Chesapeake Bay. Staged by WAPA, a local auto writer’s group, it was an extraordinary event that I want to share with you.

So in the Saturdays ahead, there will be a series of “First Drive” reports on a van, (of all things), a favorite German sports car, a bold new truck, and today, a Swedish sedan made by a Chinese owned company that sports an interior that should keep German automakers awake nights.

KENT ISLAND, MD. – In the course of more than a decade of climbing in and out of a wide variety of cars, only a few have made an outstanding first impression based on interior design.

One that will last forever in the memory bank is the S90, Volvo’s top-of-the-line midsize luxury sedan. From the Nappa glove soft leather covering the seats that are heated and ventilated, with power side support and cushion extension, to the big screen that catches the eye above the center console, you know right away this is a car that will pamper.

In a stylish fashion leather also covered the dashboard and upper door panels, with splashes of walnut wood inlays.

If you can’t get quickly comfortable in this car, what Volvo calls a “Scandinavian Sanctuary,” I would recommend an immediate consultation with your local chiropractor. 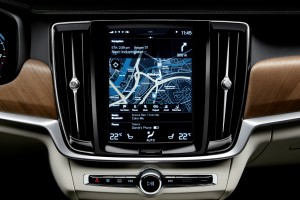 And then there is that 9 inch, really tablet sized screen that handles not only the magnificent Bowers & Wilkins sound system, ($2,650), but also climate controls, phone and navigation. It may also apologize to your aunt for that late birthday card.

Two adults can get very comfy in the rear seats with 36 inches of legroom, and behind them is a huge trunk capable of hauling home 13.5 cubic feet of whatever.

The 2.0 liter turbocharged/supercharged 316 horsepower four with 295 lb-ft of torque @ 2,200 rpm had more than enough power for all driving situations in cooperation with a responsive eight-speed automatic. Our test car had all-wheel drive, a good idea now that it’s snowing in New England. To start it, look for the knob on the center console. A thumbwheel nearby selects the drive mode. 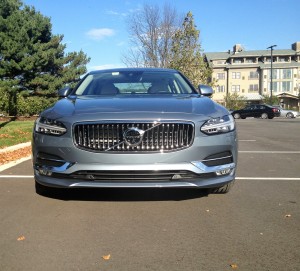 Outside, the styling is modern and fresh, and light years away from the Volvos of old that resembled ’41 Fords.

Of course, being a Volvo, there was a long list of safety equipment including pedestrian, cyclist and large animal detection. Hi Rudolph!

Handling seemed fine considering the target audience which is probably not looking for a BMW like performance.

The ride on generally smooth roads was luxury car like, but never sloppy. In my short exposure, I would say this is a sedan that screams to be taken on a run from Chesapeake Bay to the Pacific.

There is one downside. Consumer Reports was critical of the infotainment system saying it is unintuitive to use. I really did not have a chance to put the system through its paces. Others have said there is a learning curve here.

Also, the steering column adjustment should be powered.

With a long list of options, the tested S90 would roll off the lot for $66,105, which could be less than you would spend on a similar Mercedes E-Class or a BMW 5-series.

If you are in the luxury car market allow me to say that at first blush, the still made in Sweden Volvo S90 T6 AWD Inscription should be on your list of cars to try out. The seats alone may just win you over.